I'm pretty new to this whole face painting thing like I've said before, so naturally, I've never done a skull. I've drawn and painted a few skulls before on paper but never done one with makeup. I tried to find some tutorials of a basic skull but didn't find many of those so I thought I'd do a tutorial about how I did mine. I looked at all kinds of skulls to get an idea what to do and I was a bit surprised of how many different kinds of skulls there are.

Hope you guys like this! I'll definitely try this again someday with more details! 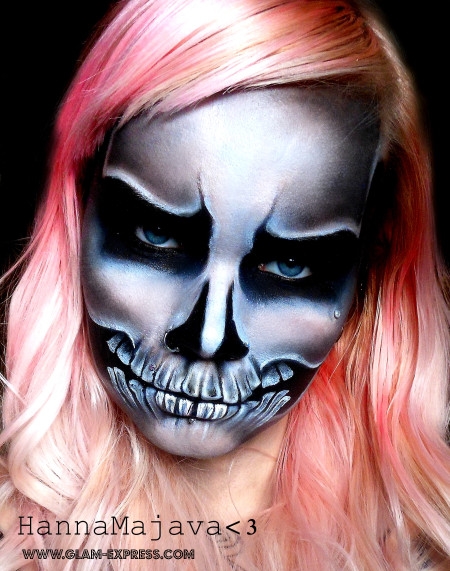 I should have provably removed my piercings for this haha :D 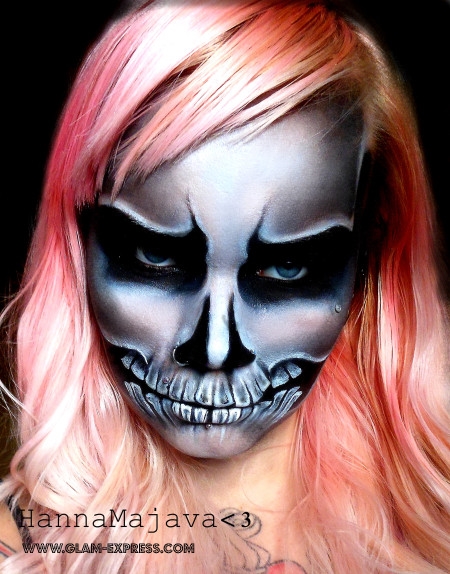 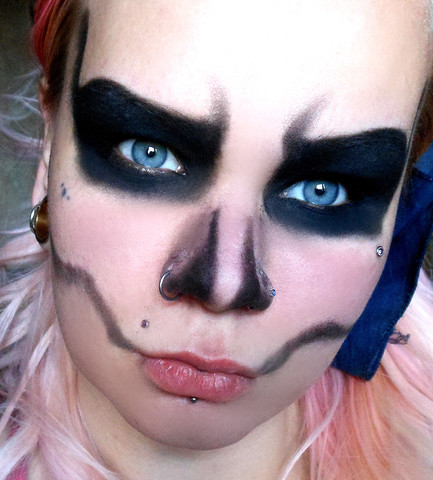 Start by sketching the eyes, nose and the jawline with a back eyeshadow. You might want to use a face primer under everything but I used Concrete Minerals eye primer 'cause  I don't own a good face primer.  I used Lime Crime lotus noir eyeshadow for the sketching. This is just a rough sketch to help you see where everything goes, so it doesn't have to be very detailed A few guidelines here and there will do. 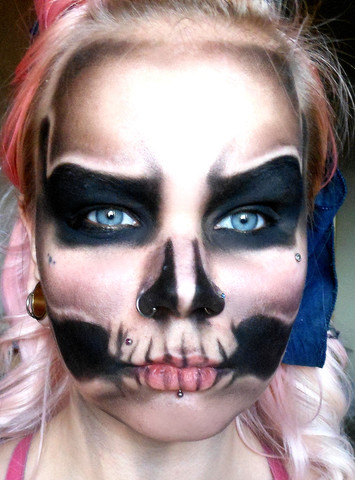 Sketch some more, Here I sketched the teeth and did some shading everywhere. I also did the jaw area black so it's easier to see again where the other stuff goes. I used a fluffy blending brush from Fanatic Cosmetics for the shading so I could build the color up slowly rather than get it right there all at once. I used the Lime Crime black eyeshadow lotus noir for this again.

Remember that this is still sketching so you can change everything if you want to later on! 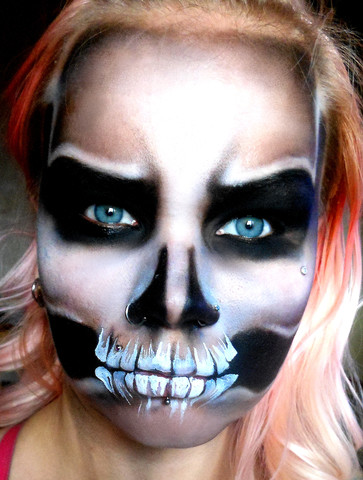 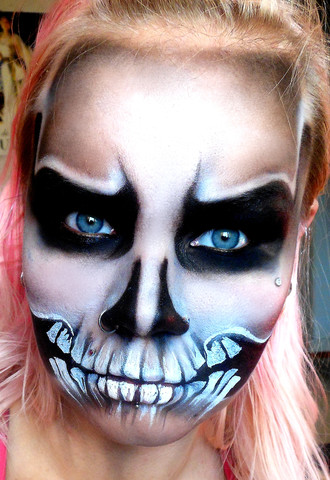 Add some more white eyeshadow where needed and create some more teeth. I decided I wanted to create more teeth than I originally planned to do, so, I added those over the black with Ben Nye white aqua color. I added the LunatiCK Labs black zombie paint cream color to the eyes as well. I defined the eye area at the same time, shaping the eyes and brows some more.  I set the black cream color with Lime Crime lotus noir again. 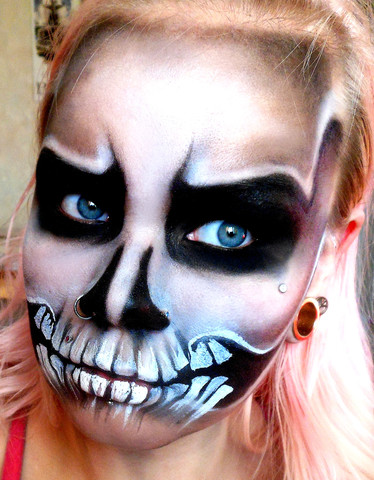 Here, you can see the side view better. As you can see, I've done some details to both sides of the skull too, I shaded those areas with black LunatiCK Labs zombie paint. 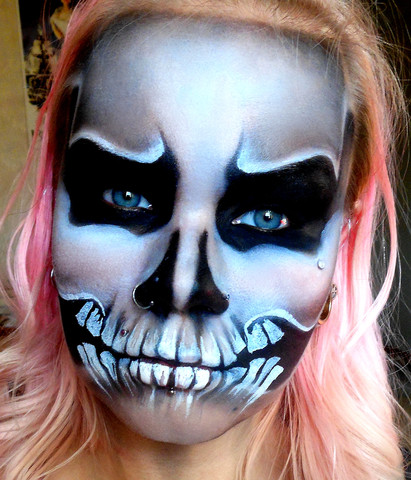 Here I added some more white all over. I added a quite thin layer of Masquerade Cosmetics white cream color where needed and blended it together with a thin layer of Lunatick Labs black zombie paint on darker spots. I started to build the color, adding just a small amount at a time. I also defined the lightest parts around the eyes and the forehead with the white cream color. I found the shape of the eyes to be pretty hard to do, since I didn't plan the shape in any way before getting started so you might want to think about that beforehand. Perhaps you might want to have more square eyes or round eyes before doing them, it's good to have a rough idea beforehand. 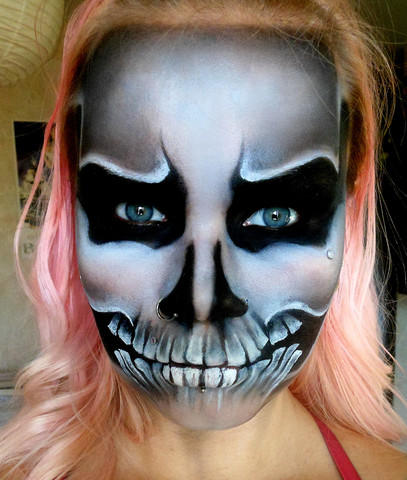 Now shade the teeth! I used the black zombie paint to shade the teeth and to add black anywhere I wanted. I also added a bit of white where it was patchy like on my chin. 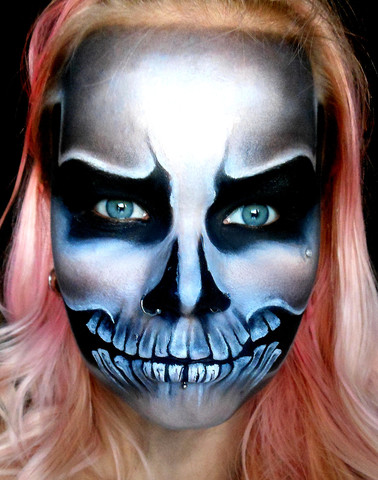 I set the black & white cream colors everywhere with black & white eyeshadows. I used Sugarpill Tako and Lime Crime lotus noir. I also defined the teeth with Masquerade Cosmetics black cake eyeliner. I added some cracks on the teeth and black behind them on my lips. 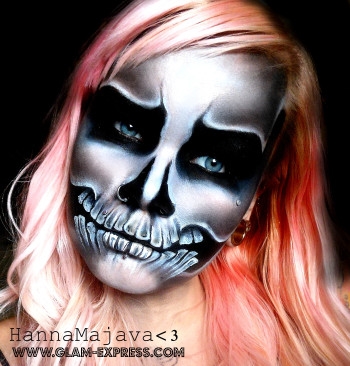 Now just some final touches, make sure everything's blended & defined like you want. I also had to add black eyeshadow 'cause some places were a bit patchy. Then I  applied Urban Decay eye-pen zero on my waterline and lashline to keep the eye area dark and some black mascara from Masquerade Cosmetics.

I also added some final shading  around the teeth. 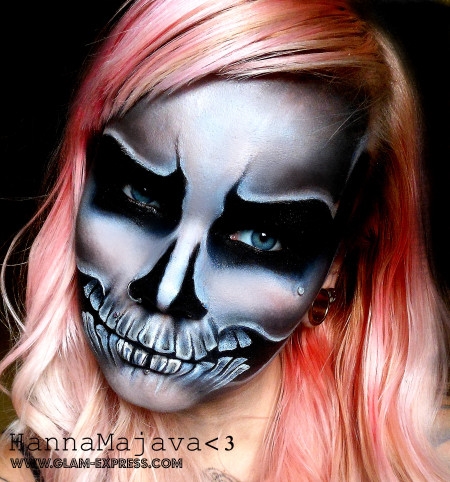 I think it was really fun doing my first ever skull so I'll be doing more of these some day. I would have wanted to add some cracks here and there and some other details but I'm pretty happy with how this turned out. I figured out later that some colored eyelashes might've looked really cool with this too :D!

Have an awesome day there and thanks for reading <3!!