I’ve been wanting to try out doing something with lace in it for ages, I’ve tried to draw it on, use lace as a stencil, use the lace as a kind of a stamp and lots of other things that failed but I think I figured out now how to get a lacey pattern on our skin nicely :).

I had to actually do the look multiple times just because I ended up messing the lace-pattern in so many ways during the process but in the end I managed to do a pictorial about it and the look of course :D.

This is how the look ended up looking like :) 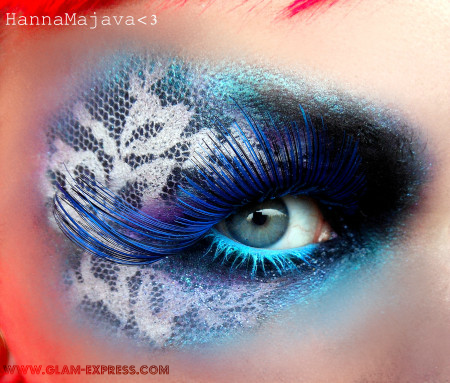 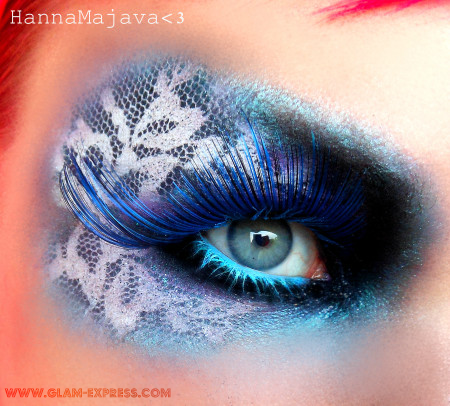 Start with something sticky & white on your lid on the area you're going to place the lacey pattern on. I used LunatiCK Cosmetic Labs White Prime Time primer. I think white primer would be best 'cause that way it doesn't dry before you add some eyeshadow on top of it :) 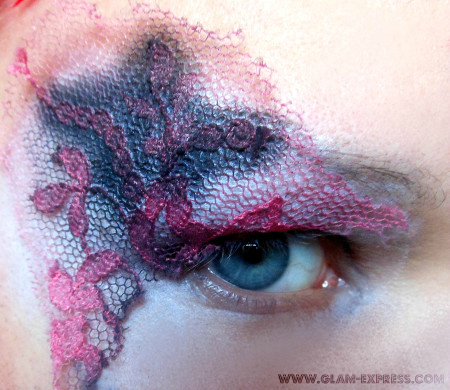 Put the lace you're going to use as a stencil on top of your sticky white thing. I didn't need any tape; this is where the stickiness from the base comes handy. Just press the lace against the white part and with a detailing brush pat black eyeshadow (or any shade you'd like) on top of the lace. It should stay in its place the whole time you do the patting if you're careful.

You don't have to apply too much pressure with it unless you have really thick lace with a very detailed pattern. I tried with different lace textures & the thicker the lace was, the harder I had to pat the shadow on and the harder it was to get it right. I took my lace from an ugly old scarf and it's pretty thin :D I used Crownbrush Smoke it Out Palette for the black shade. 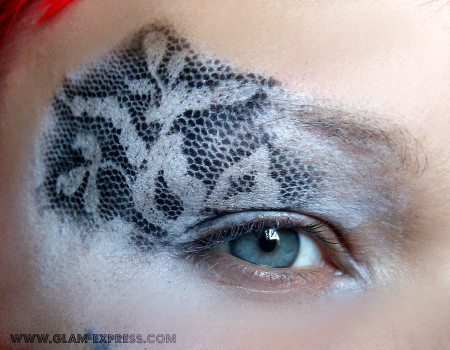 Now you have your black lacey pattern there :)!! I added some primer on the other areas as well to do the actual makeup. I think I could have done this the other way around, makeup first, then lace, but I just wanted to make sure I got the lace there alright before spending time doing the other stuff. If you want to wear this for a bit longer time than a few hours I’d suggest putting some white eyeshadow lightly on top of the white parts to avoid the pattern from getting smudged :) I used Sugarpill Tako for the white parts :) 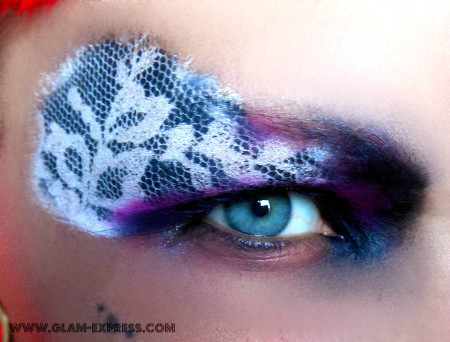 Start placing black, pink & purple eyeshadows using the smokey eye technique and apply a darker shade under the brow like in the pic. I used Sugarpill Dollipop, Poison Plum & Crownbrush Smoke it Out palette for the black.

You might notice this pattern is different from the pic above 'cause I ruined the original pattern by smudging it too much with eyeshadow :D so don't do that :D!! Put everything on very lightly when doing something right around the pattern. 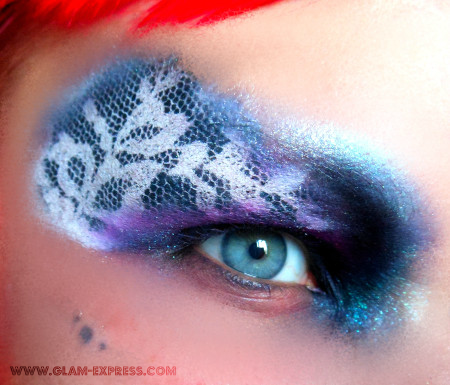 Add some sparkly baby blue all over except directly on top of the lace-pattern. I used Glamour doll Eyes Mighty Maiden & Sugarpill Lumi for the bluish sheen. This will make the lace pattern blend in with everything else much better :) 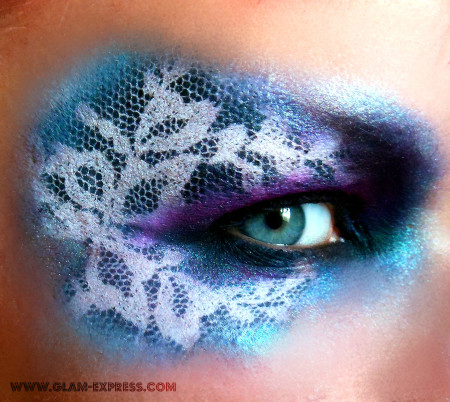 I wanted to apply a little bit more of the lace pattern so I re-applied some more around the outer edges of the eye & added the eyeshadows exactly like I did before. I also added more of that blue shimmer in the parts where the pattern ended.

This is why it was nice that i used a primer under the pattern, these shades stick to the primer nicely and the pattern doesn't look that much like a stamp :) Here I added some black on the darkest areas and dark blue glitter around the lashline. I used Violet Voss Meiko Glitter with Fyrinnae Pixie Epoxy as adhesive.

I also put Lime Crime Parasol eyeshadow on my waterline, Anastasia Hypercolor Lashtint in Electric Blue on my lashes & Parasol again on top of the lashtint on my bottom lashes to get them baby blue. Then just add some dramatic false lashes like these Eldora C187 lashes and some more blue shimmer or black if you feel like you need any :).

Hope you guys liked this, I’m definitely using more lace patterns in the future :). You can do lots of different effects with them using different kind of a lace. ...and a lace-mask for Halloween would be pretty cool I think :)!!

Have a lovely day everyone :)!!

Couchlane is now a member of Glam Express
yesterday
Welcome Them!

asepto is now a member of Glam Express
Tuesday
Welcome Them!

fire stick frozen is now a member of Glam Express
Aug 13
Welcome Them!

chriss brat is now a member of Glam Express
Aug 12
Welcome Them!