After doing that Stitch look last week I kind of wanted to do a Disney villain too. I had a bit of a hard time choosing which villain to do since they’re all so cool but I ended up doing Cruella de Vil from Disney's 101 Dalmations. This is my second time doing a specific character and attempting to do it just like the original one but I think it's pretty accurately done.

I think faces are hard to do in such a small space even if it's not exactly a very natural human face so I’m pretty happy with how this ended up :) 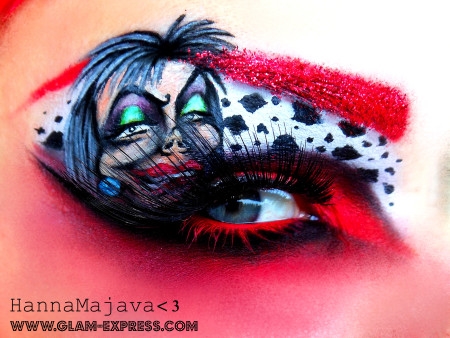 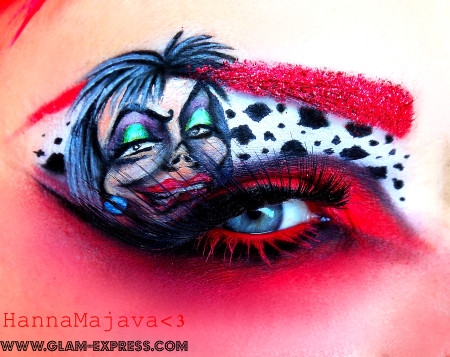 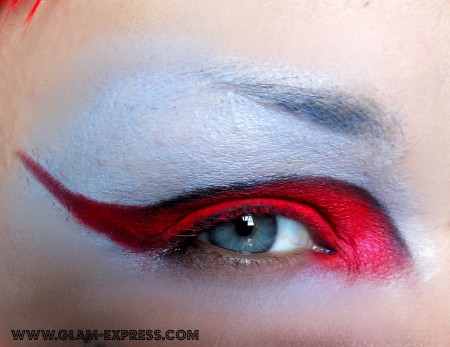 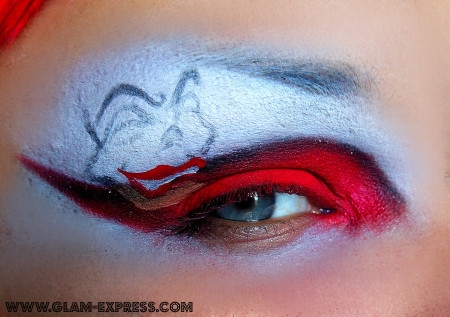 Apply white eyeshadow on the entire area from the red to your brow. I used Sugarpill Tako. I also put some black eyeshadow to kind of shade the black pen, for that I used Lime Crime lotus noir. Then start sketching the face, for that I used Mehron paradise palette and Masquerade Cosmetics black cream color :). The sketch doesn't have to be very accurate, it's just a guideline to what you'll do next and to measure how well the character fits where you're planning to put it. Then define the sketches you made earlier with eyeliner, I used Masquerade Cosmetics black cake eyeliner with their eyeliner activator. I also filled in the skin color with a Mehron paradise palette shade and shaded the defined lines a bit with Masquerade Cosmetics black cream color again :). For the highlight/ shiny part on the lips , I applied Ben Nye white aqua colour. 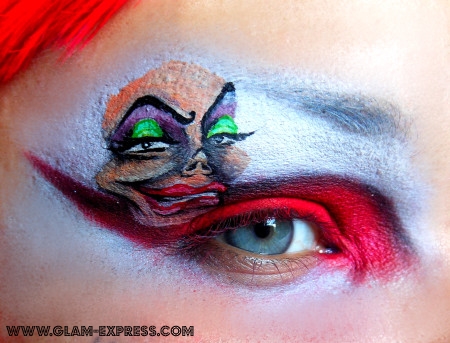 Then fill in Cruella’s lids, as you can see she has a pretty wild eyeshadow choice of green & purple all the way to her brows :D I used Mehron paradise palettes again for that. I also shaded everything a bit more with Masquerade Cosmetics black & white cream colours and defined the darkest lines more with their black cake eyeliner. 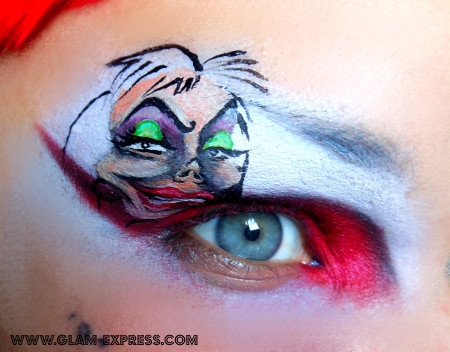 At this point I set the lighter parts previously done with the cream color with white eyeshadow, Sugarpill Tako, and sketched the hair. I used Golden Rose liquid liner for the hair. 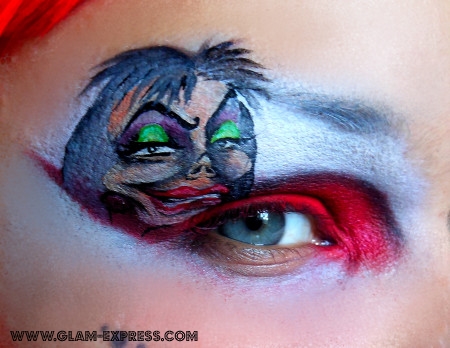 Then fill in the hair with grey and set the previously done black cream color shading with black eyeshadow. I used Lime Crime lotus noir for the black and Mehron paradise palette for the grey. Here I did the earring with a blue shade from Mehron paradise palette & white Ben Nye aqua colour and started to define the hair. I tried to get the other side to look like black and the other side white but that was a bit hard. I used Masquerade Cosmetics black cake eyeliner for the hair with their white cream color lightly done in streaks. 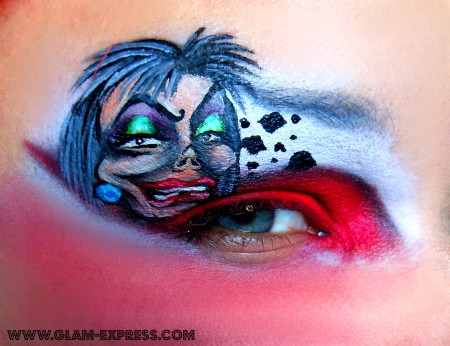 Sorry for that red cheek, I had a bit of fallen out eyeshadow that smudged.

I continued defining the hair in darker & lighter streaks using Masquerade Cosmetics black cake eyeliner & white cream color, I also continued shading and defining the face with Lime Crime lotus noir eyeshadow. And as you can see I started to do those Dalmatian spots that this "look" obviously needed. 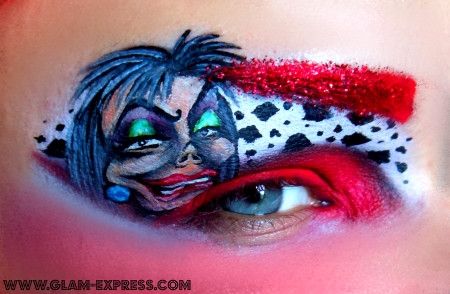 Then, fill the whole white area with the spots, I used Golden Rose liquid liner for them, and add some red glitter on your brows. I ended up putting glitter on Cruella’s hair too which you probably want to avoid doing if you do this same thing. I used Violet Voss Rose glitter with Fyrinnae pixie epoxy as an adhesive. I also defined the face & hair some more, again using the black Lime Crime eyeshadow lotus noir :). I do the shading with a very fine brush shading a very small area at once, that's why I continue doing it pretty much through the whole process. Here I did some shading & defining with the black cake eyeliner & Lime Crime lotus noir for the last time, put some Concrete minerals eyeshadow Risque on my waterline, tried to sweep off any fallen out glitter and then put on Sugarpill cateye lashes. I also put on some Anastasia hypercolor lashtint in “In the Pink” with Concrete Minerals Risque on top of it.

After doing all that defining & shading it's finally ready :D!!

Hope you guys liked this, I promise no Disney characters next time haha :D!!

Have a great day there and thanks for reading <3!!

wow such detail hanna u amaze me every time :-)