I've been meaning to do Stitch from Lilo & Stitch on my eyelid for a really long time and now I finally got the courage to do it :).  I'm always kind of afraid when doing a well known character that it won't resemble the original one but I think I did pretty good this time. I usually modify the character a bit to avoid it not looking like the original but I really couldn't modify Stitch in any way.

Here's how it turned out : 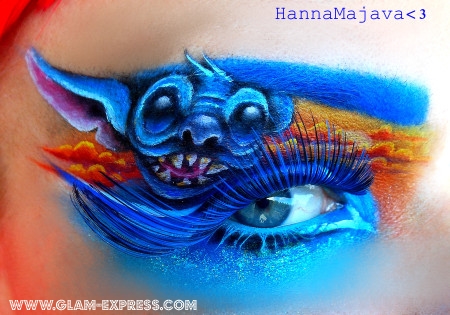 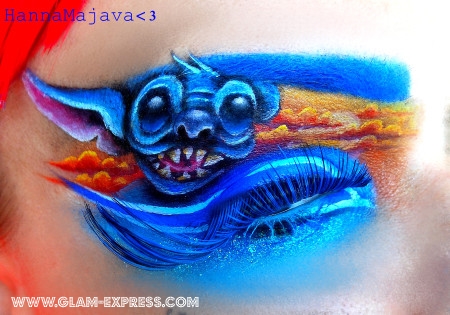 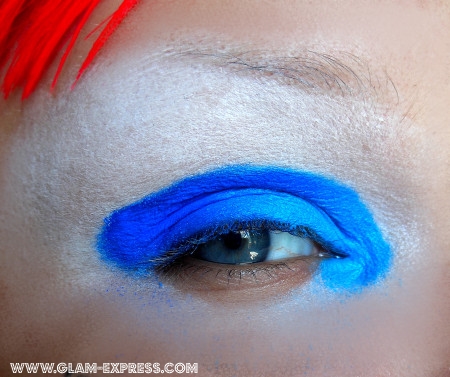 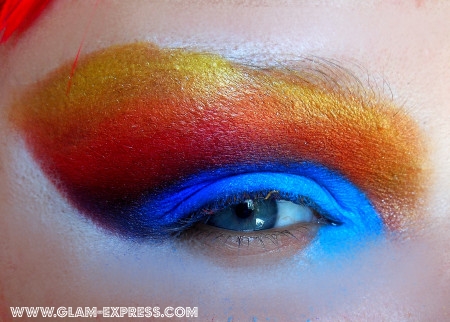 Fill the rest of the area under your brow with "Sunset Colors". I typically use purple, red, orange & yellow for sunset stuff  :). I used Sugarpill burning heart palette (all the shades) and Concrete Minerals hearts, Juvenile & Napalm. 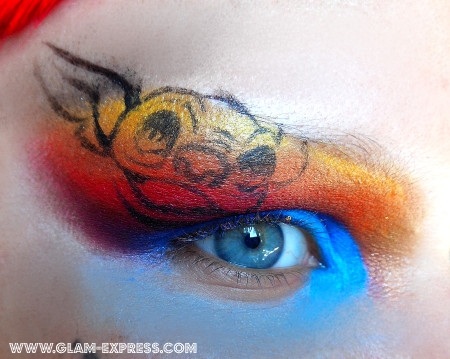 Now sketch Stitch or whichever character you'd like to do :). I think this same process goes for all kinds of characters :). I used Masquerade Cosmetics Black Cake Eyeliner. The sketch is just a guideline so you don't have to spend that much time with it. 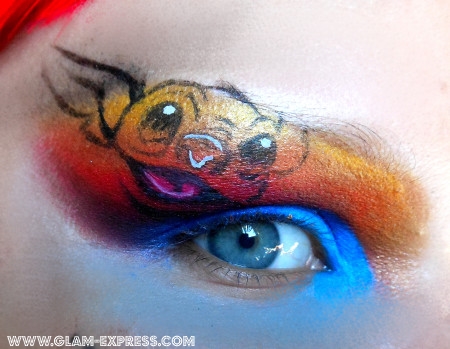 Start to do the smallest parts first. I did the tongue in the mouth first as I was going to put teeth in front of it later but still wanted a little bit of tongue to be seen there :D  I usually do the eyes first too :). Here, I used Ben Nye White Aqua Colour and the pink on the tongue is from Mehron Paradise Palettes :). I shaded the black parts again with Masquerade Cosmetics Black Cake Eyeliner. Here, I did the eyes and the nose as they are the most detailed parts, I think. I used Mehron Paradise Palettes in Tropical & Pastel for them along with Masquerade Cosmetics white cream colour to do the white "glow" and black cake eyeliner. I basically did both parts blue, then shaded with black & white. 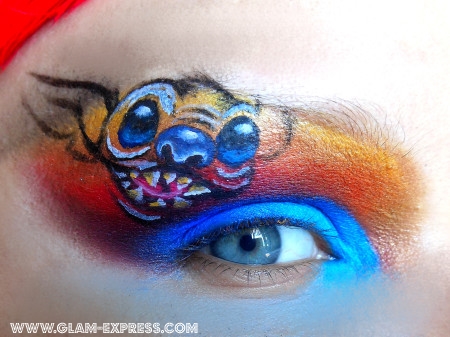 Then do the teeth with Ben Nye White Aqua Colour & Mehron yellow from the Paradise Palette. Also roughly define the lightest parts of the characters face with Masquerade Cosmetics white cream colour so you can later blend. 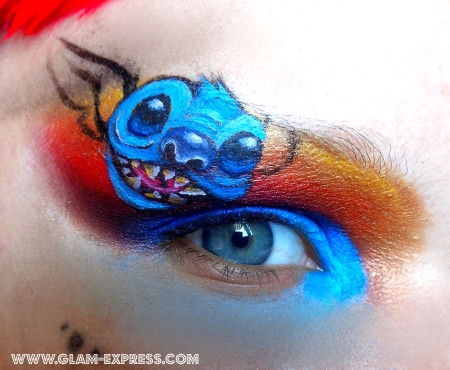 Now fill in the face with blue Mehron paradise shade. Blend the blue in with the previously added white cream colour so it stays visible which parts are the lighter ones. 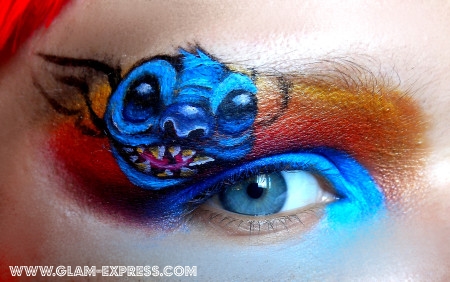 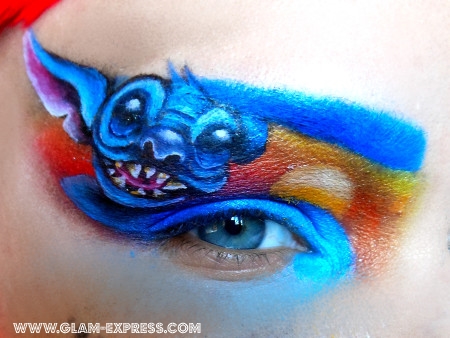 At this point I had done the ears too. I did the ears just like the face: first Mehron paradise shades, then eyeshadows on top to set & define. I used Sugarpill Afterparty, Tako & Dollipop for the ears. I had also defined the face a bit more with the same eyeshadows mentioned in the last pic. I do the eyeshadow setting with a very small detailing brush very slowly adding lighter shades where I want light and darker shades where I want shadow.

Also to do the sunset behind Stitch I added the sun. I used Mehron yellow paradise shade with Sugarpill Buttercupcake & Tako on top. 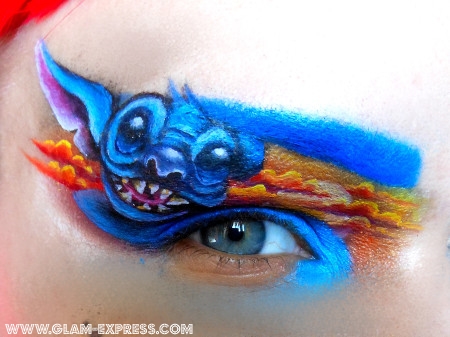 Then I added the sunset clouds using Mehron paradise colours in purple, red, orange & yellow and Sugarpill Poison Plum, Love+, Flamepoint & Buttercupcake on top of them. I also used Lime Crime Uniliner Citreuse to get the brightest yellow parts brighter. 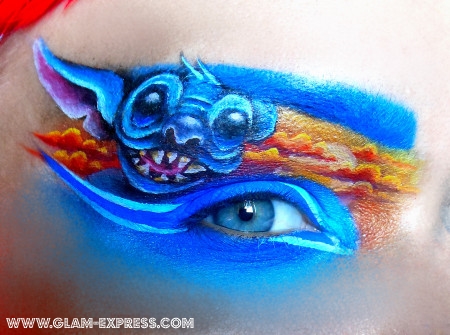 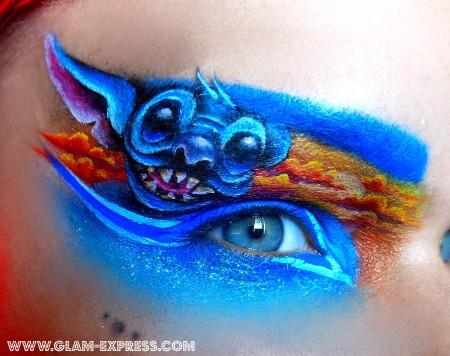 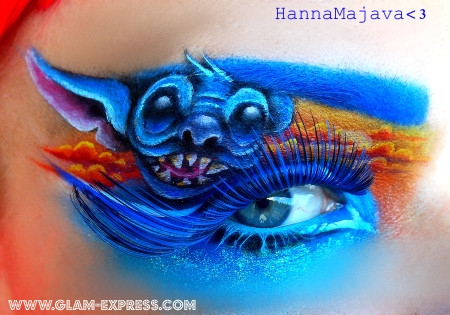 I hope this made some sense to you guys, I’m not sure how good I’m at explaining this stuff but hopefully you liked it!!

Thanks for reading & have a great day there <3!!