I've been planning to do some kind of a Queen of Hearts look from Alice in Wonderland for ages but I ended up doing the playing card instead.

Hopefully I'll some day have an idea for the Alice version too!

Here's how it ended up: 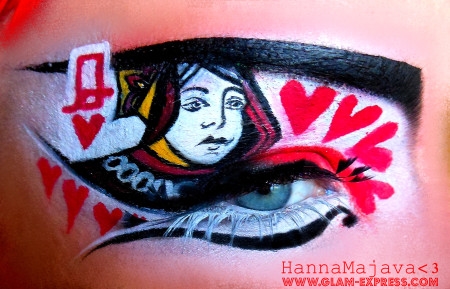 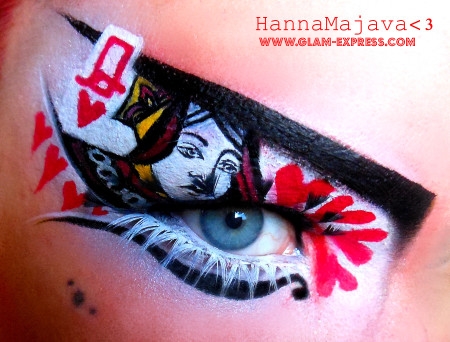 Start with primer and white eyeshadow on  the place you'd like to create the design. I used Lunatick Labs White Prime Time Primer and Sugarpill Tako. Ignore that blue on my eye, I was just wearing blue before  I started doing this look. 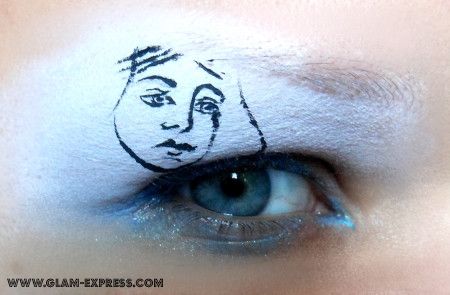 Start drawing the face with black liner. I used Golden Rose liquid liner for this but a matte liner might've been better. 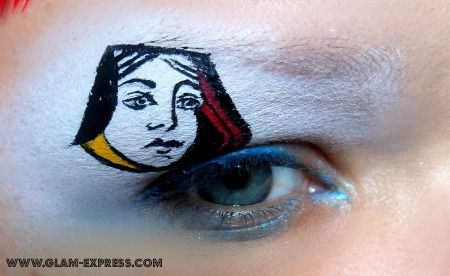 Do the areas around the queens head, I think it's a scarf and a veil. I used again the black Golden Rose liquid liner and Masquerade Cosmetics eyeliner activator with Sugarpill shadows Buttercupcake and Love+. 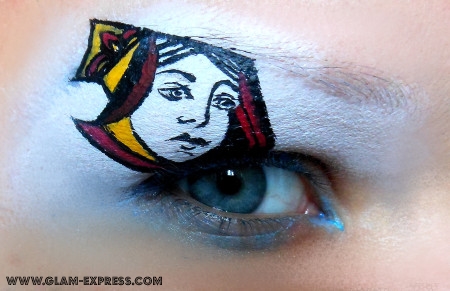 Continue by creating the crown. I used all the same products as in the last pic. You probably see why a matte liner would work better now, my glossy liner is leaving those kind of cracks in the middle of the design and it's... well, glossy. 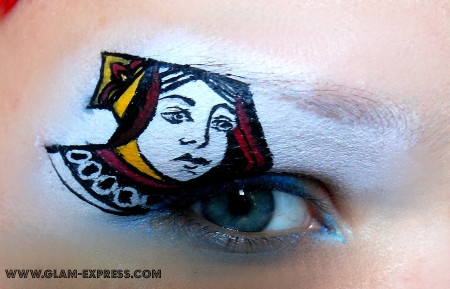 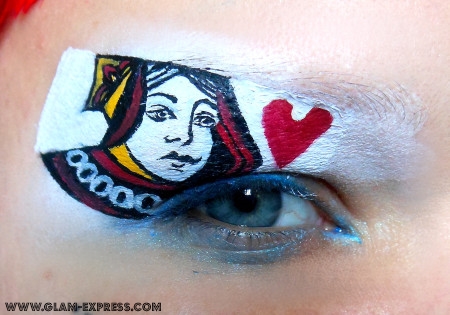 Finish the shoulders and define the white area behind the queen a bit more with something like Ben Nye white watermakeup. Then, draw a heart next to her with Sugarpill Love+ used with Masquerade Cosmetics eyeliner activator. 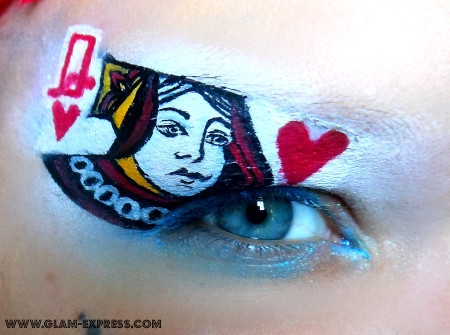 Then create the "Q" and a heart with the same products as you did the previous heart. 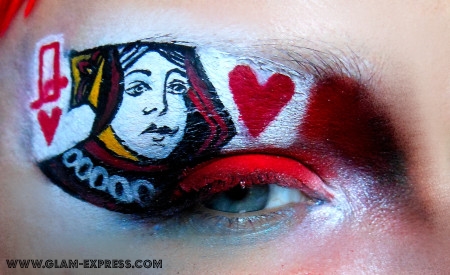 Ignore everything but the actual lid here, I changed my mind about this version haha :D Sorry, I don't have a better pic! But I applied some black, white and red eyeshadows on the upper lid. I used Lime Crime Lotus Noir, Fly Dragon Fly, B*tch Slap Cosmetics red UV pigment and Concrete Minerals Frost. 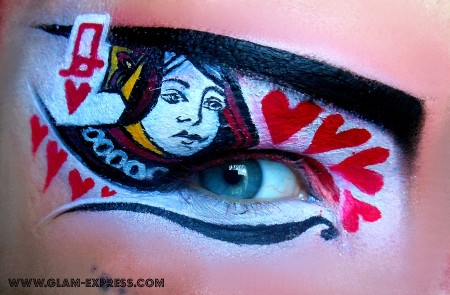 Here's the right version! I decided to put white all over the area under my brow and draw on more hearts. I also applied white on my lower lid. I used Sugarpill's Tako as matte white and concrete minerals frost as a shimmery white. I also drew on the dramatic brow with Lime Crime's Lotus Noir eyeshadow over Golden Rose liquid liner. I used Lime Crime's Fly Dragon Fly for the rest of the hearts with Masquerade Cosmetics eyeliner activator and did my eyeliner with the Golden Rose liner again. To get the black liner to stand out more under my eye I applied a white line there too with Ben Nye white watermakeup. 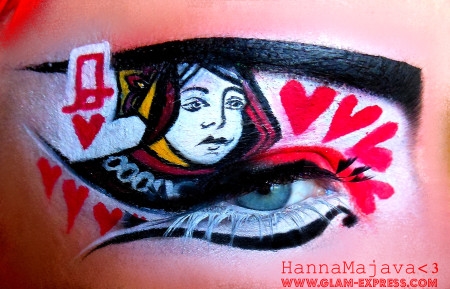 Then just add lashes and some white pen/eyeshadow on your waterline and it's all done. I used Eldora S203 lashes with Sugarpill Precious Lashes painted white. I also applied Sugarpill Tako on my waterline and defined the glossy black parts with Lime Crime Lotus Noir black eyeshadow.

I think this would be really fun look for a Queen of  Hearts costume !

Thanks for reading, hope you liked this tutorial <3!!

creativity beyond compare and such great detail <3

Rauldlr is now a member of Glam Express
Thursday
Welcome Them!

Lathiya Lathora is now a member of Glam Express
Wednesday
Welcome Them!

JamesWilliam1 is now a member of Glam Express
Oct 15
Welcome Them!

Harry Lewis is now a member of Glam Express
Oct 13
Welcome Them!